Krita has been a drawing software with plenty of mysteries that I’ve been struggling to understand. On the insistance of plenty of good friends, I had to try it out cos it’s been described as a heavily customisable and very intuitive piece of drawing software, and there’s a lot of truth in it. Krita’s become my primary drawing tool for my LegalEagle illustrations, after all, and its shortcuts and the way it offers an immediacy in its tools has been very helpful and a lot more sensible than using similar functions in other software.

However going through the gears is a tough challenge in itself, and it always feels like Krita’s just a step above what I can comprehend every time I find a new way to utilise some sort of brush or a new kind of tool. Learning Krita’s just not such an easy step for anyone jumping over from Photoshop or Paint Tool SAI, and it might be an errand that I will dabble in for years at this rate, and still uncover new mysteries. I was always lured by the promise of making my own brush sets that would feel natural for me, and its cos of this reason that I wanted to have my hand at trying many brush presets it has, and make quick, disposable, playful little drawings. But as my habits would always do, I spent a considerable amount of effort and time on several of these, and I do not regret it. Here we begin with the first of my experiments: 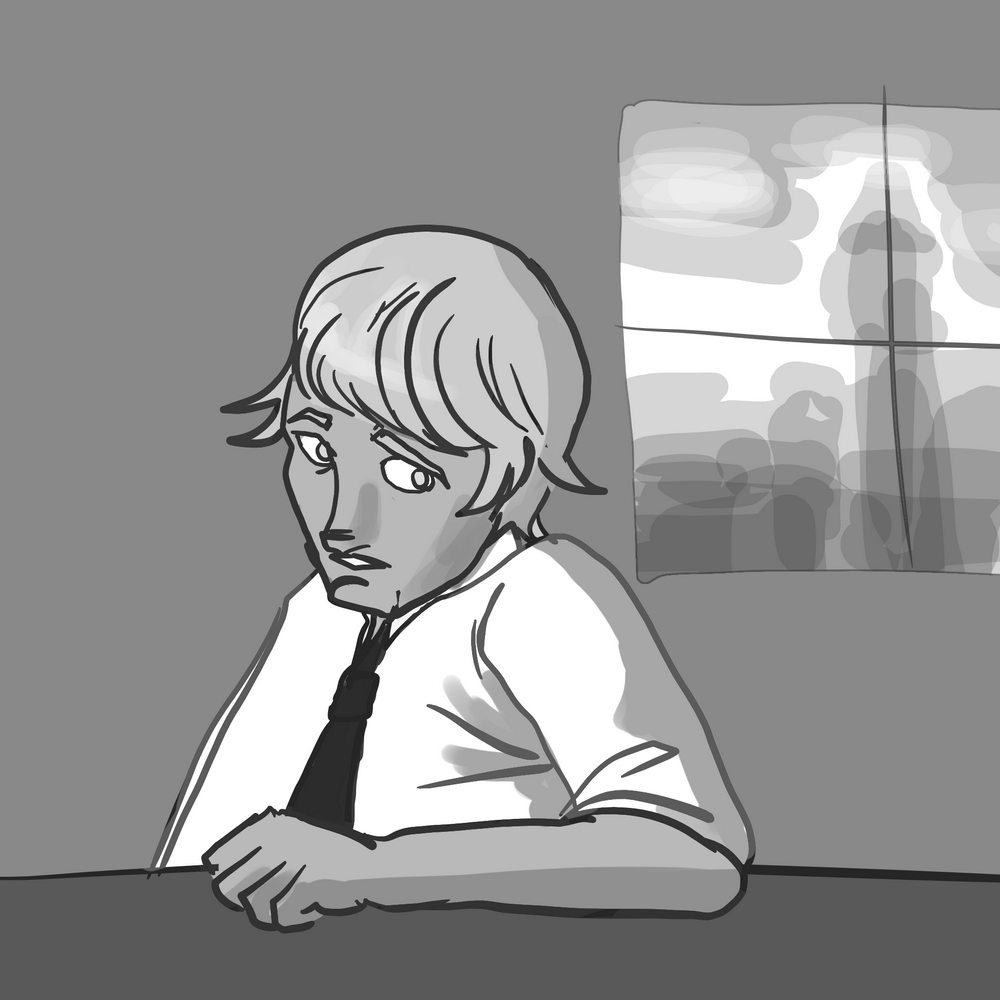 Basic-1 brush. I just had to do a small drawing of Jeremy just to keep things simple, but I also felt compelled to change the settings a little just to allow for some form of pen pressure, because I really can not imagine a lot of use for the pressureless brush. The thing I wanted to try the most was to see what can it do with backgrounds, and I think playing with selective opacity is just a really lousy gain to make some atmospheric backgrouds like that one behind the window. Doesn’t help that Jeremy doesn’t look too good either. 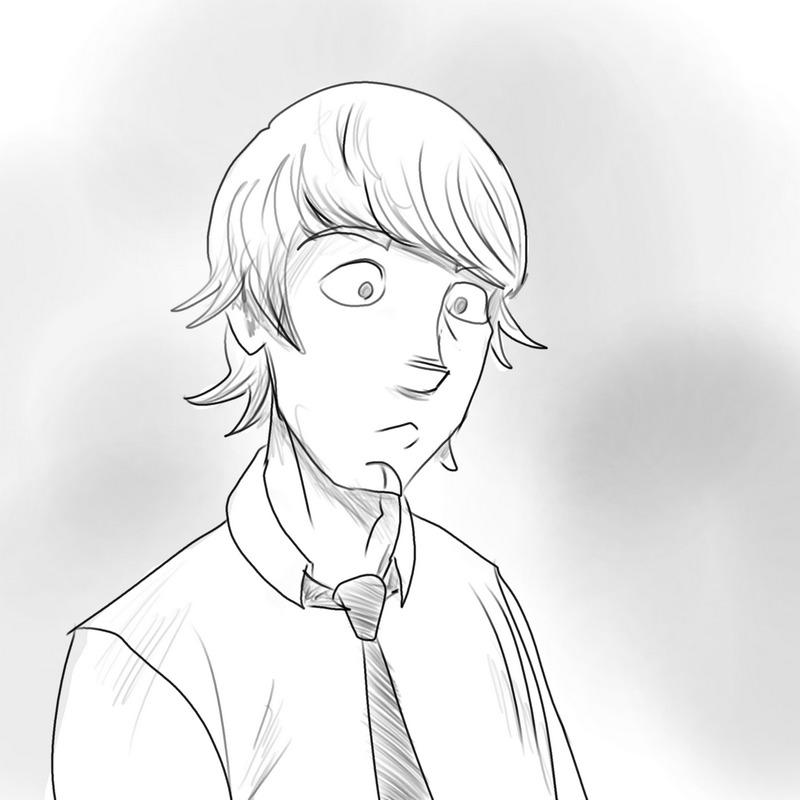 Airbrush Soft. This one’s a lot better. I saw some people use it for light sketching and I tried my hand on this Jeremy which I think looks really nice and the softness of the brush also makes him look non-threatening, which is a bonus. Jeremy’s kind of a rough character to work on and I’m consciously trying to make him look sympathetic, ‘cos nobody wants a gloomy, spiteful protagonist. He definitely needs to frown less. 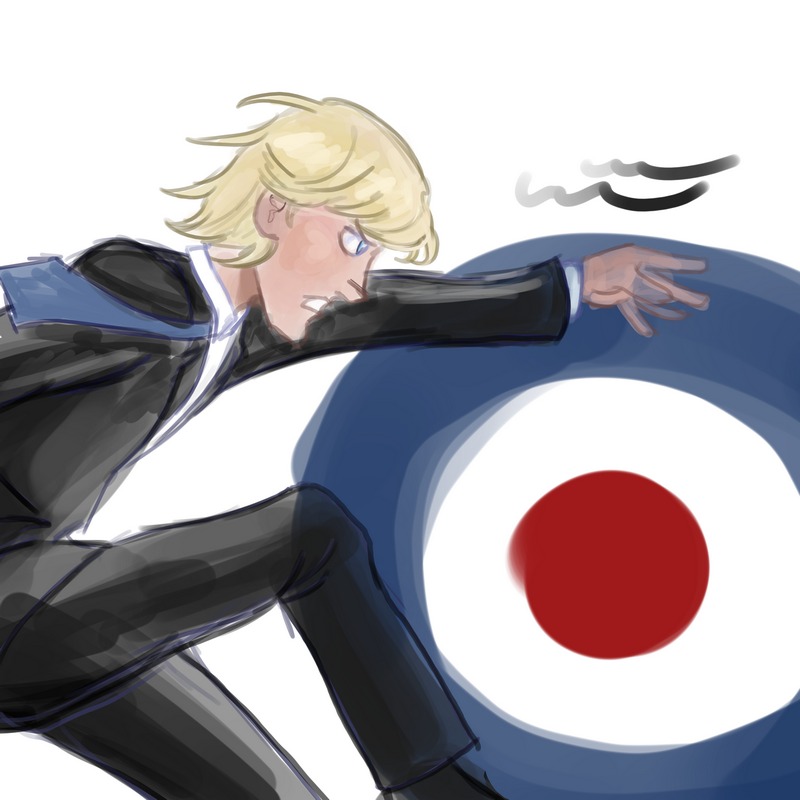 Basic-2 Opacity is a really useless brush for me, which similarly has no pen pressure ability, but has an opacity pressure used for very situational shading. It doesn’t really work here since I’ve made this image look too soft, pastel-coloured and diluted, like it’s a beginner’s watercolour painting. (I wasn’t exactly known as a smashing watercolour painter either). And I also hate how it reminds me that Jeremy’s blonde boy look is strikingly similar to world leaders like Boris Johnson and Donald Trump, which is a connotation I’d really like to avoid. 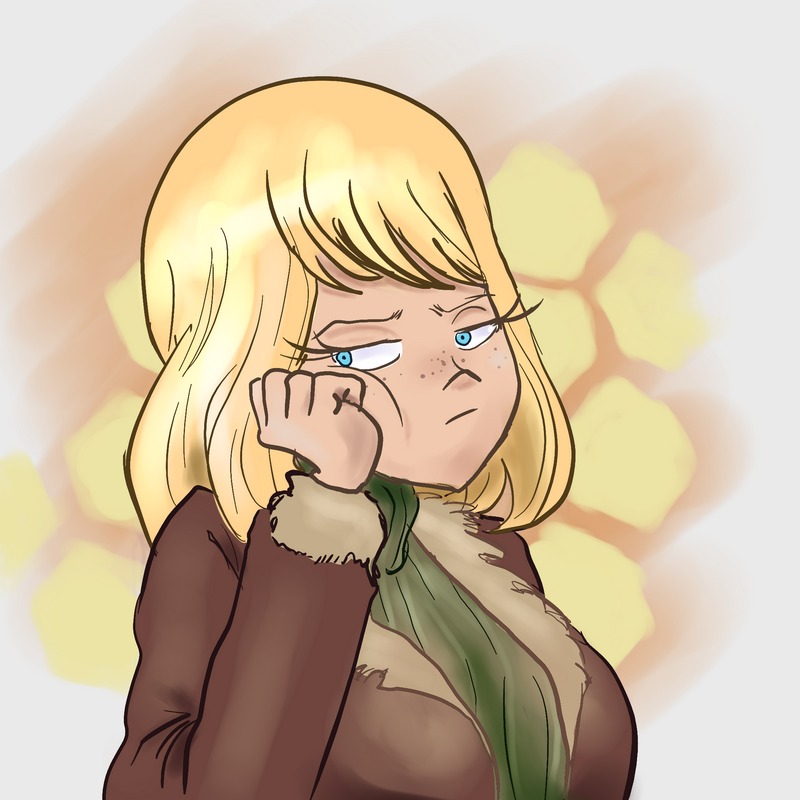 Basic-3 Flow is weird. It’s basically like the one above meaning it has no pen pressure, but has a wavy, light mark on paper, and very ideal for making shadows or highlights. This drawing of Susan I made isn’t half-bad considering I used the pen for highlights on the jacket and hair, but I also think there must be a better way I could have drawn her, since her outlines portrude with real razor sharpness. This is exactly the kind of situation where I might have used that Airbrush for the outlines.

Basic-4 Flow Opacity was really fun though and I can see myself having a lot of use for it. It’s great for atmospheric elements such as reflections on various surfaces and foggy constructions such as glows and clouds. It was exciting to make this lighting study of Nelly walking in London at night(with various period piece artifacts in the background, like the premieres of ‘A Hard Day’s Night’ and ‘Goldfinger’). Stylistically I took major inspiration from the nighttime street sequences in Fritz Lang’s “M”, happening in front of brightly-lit storefronts and completely washing their onlookers with light. The scene below really describes the kind of atmosphere I was trying to get.

I love the way I managed to get Nelly’s hair and coat to shine, and how I’ve thoughtfuly coloured her eyes to appear more fleshy and also more alive with strong accents of white shine. This was one of my greatest successes with these brush experiments. 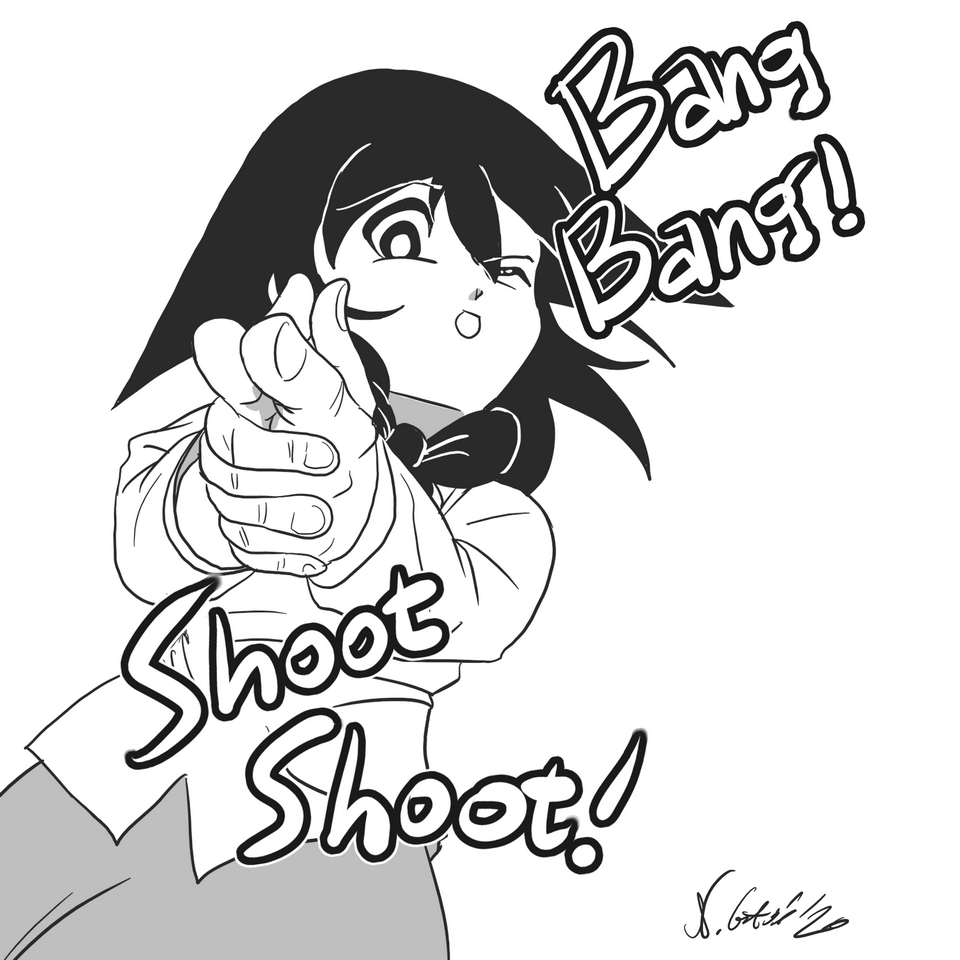 Basic-5 Size default is one of my de-facto brushes cos its the first brush Krita new users encounter out-of-the-box that offers controllable size through the use of pen pressure, and so I’m a very frequent user of it(to the point I had to make more than one drawing!). In this one I just liked drawing Nelly in a more dynamic pose as a way to practice shirt folding, and up-close shots of hands and fingers. Obviously I also had to sneak in a Bealtes reference in there, cos “Happiness is a Warm Gun” just happened to be in my mind at the time.

There are some other things where I used the same brush, like this quick and not too good picture of Susan. However it really shows how basic, clear and utilitarian this brush is. 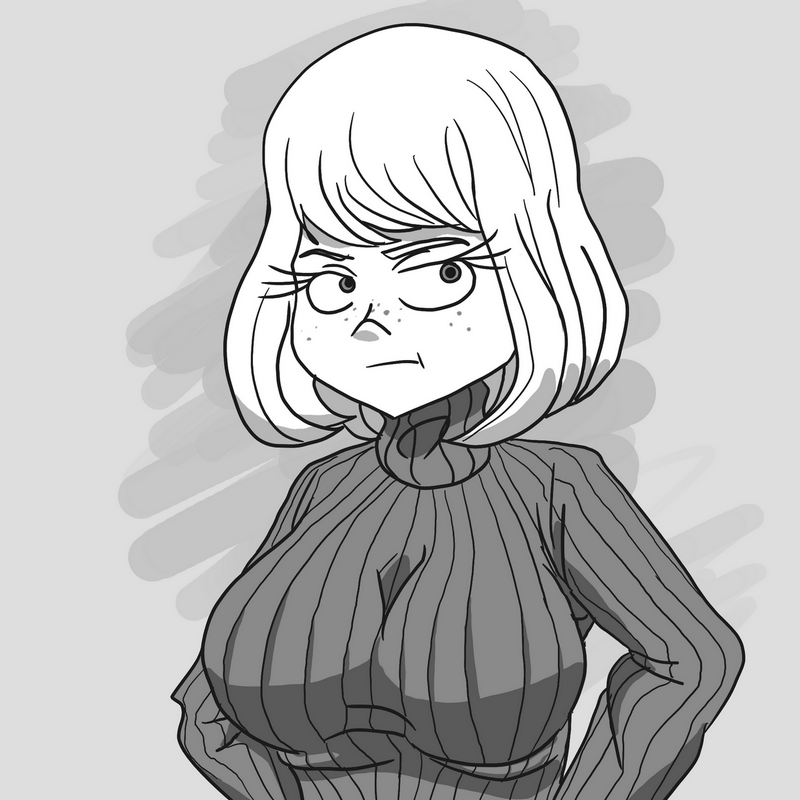 I also leaned on this brush heavily when I did one of those “Six fanart” challenges on Twitter. 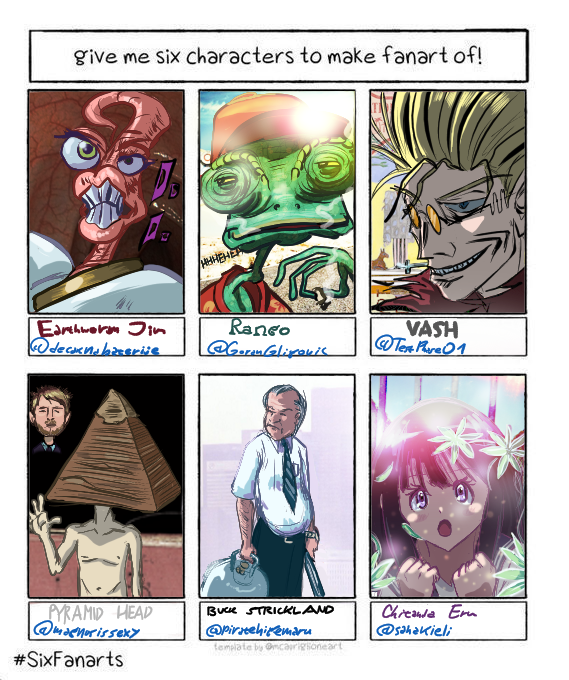 The six fanarts weren’t done in ideal circumstances since I painted them on a really small template(when I should have upscaled it), and I might have vented some of my frustrations out when I did these deeply unflattering depictions of some characters(For example I drew Vash the Stampede as an exaggerated Hellsing character to mask the fact I have never seen Trigun), but I do like the colouring I’ve done on Earthworm Jim, Buck Strickland from King of the Hill, and especially Chitanda Eru from Hyouka, since my love for KyoAni style of colouring shows. I actually went out of my way to study some Hyouka frames and how they were coloured, and I produced some really great colouring results that way, allowing me to overindulge in my use of and glows and instagram-like filters. And for those wondering, yes, that is the cover of Tame Impala’s Lonerism in the background. lol.

Not long after I made this off-hand sketch in the spur of the moment: 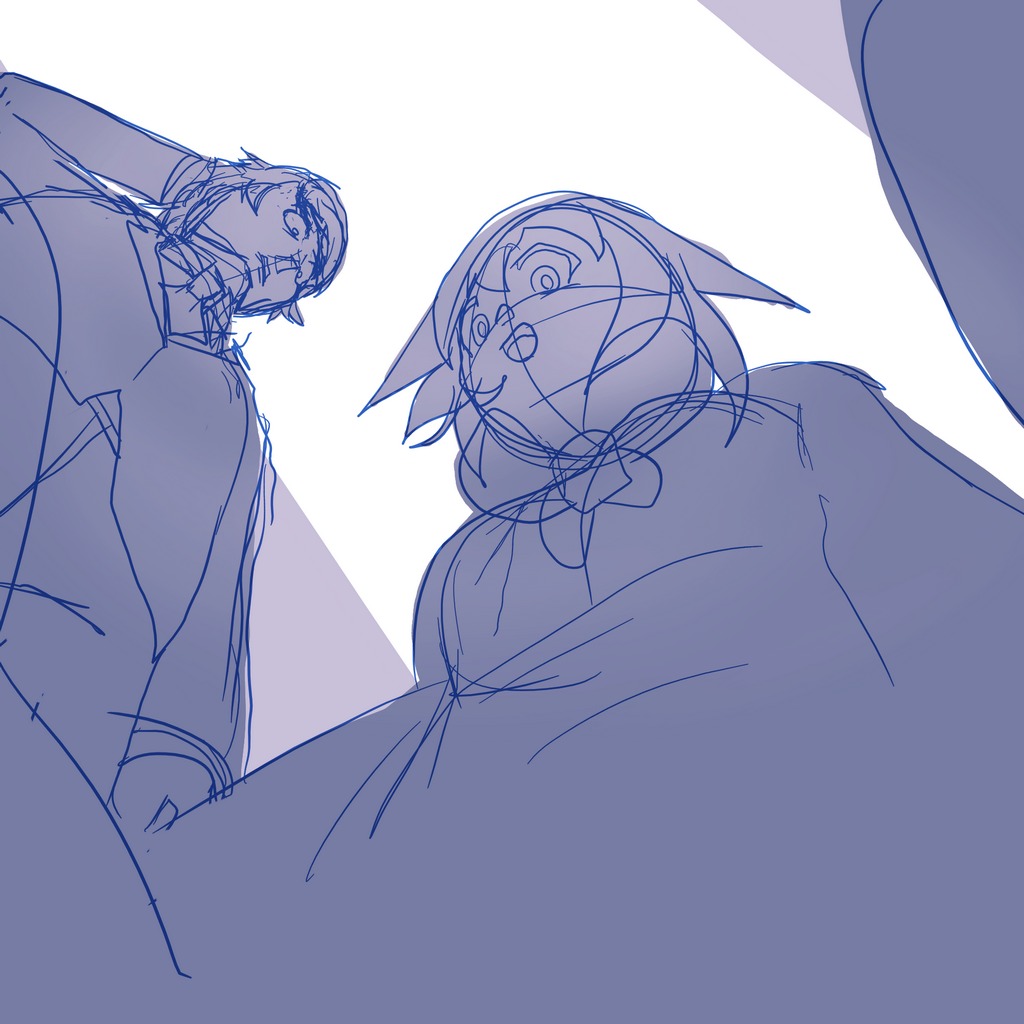 It was Nelly holding a camera and either testing how to film with it or shooting a selfie. I draw these shots mainly cos I like practicing underface shots, because of the challenges they make for drawing mouths, noses and eyes. I wanted to make this sketch as a one-off thing and be over with it, but a month later I was compelled to pick it up again and give a full treatment of this drawing, resulting in another one of my best lighting experiments. 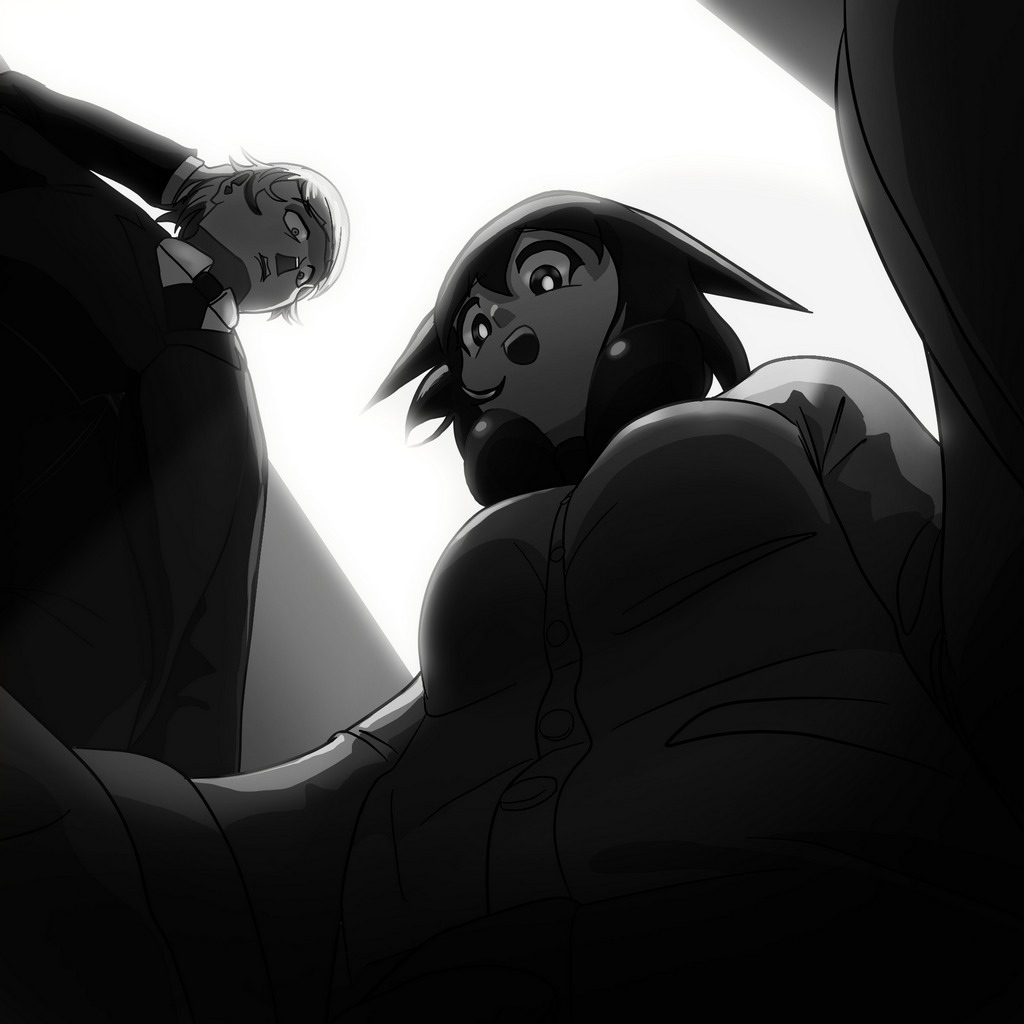 Add to that some grainy film filters on Photoshop, aaaand… 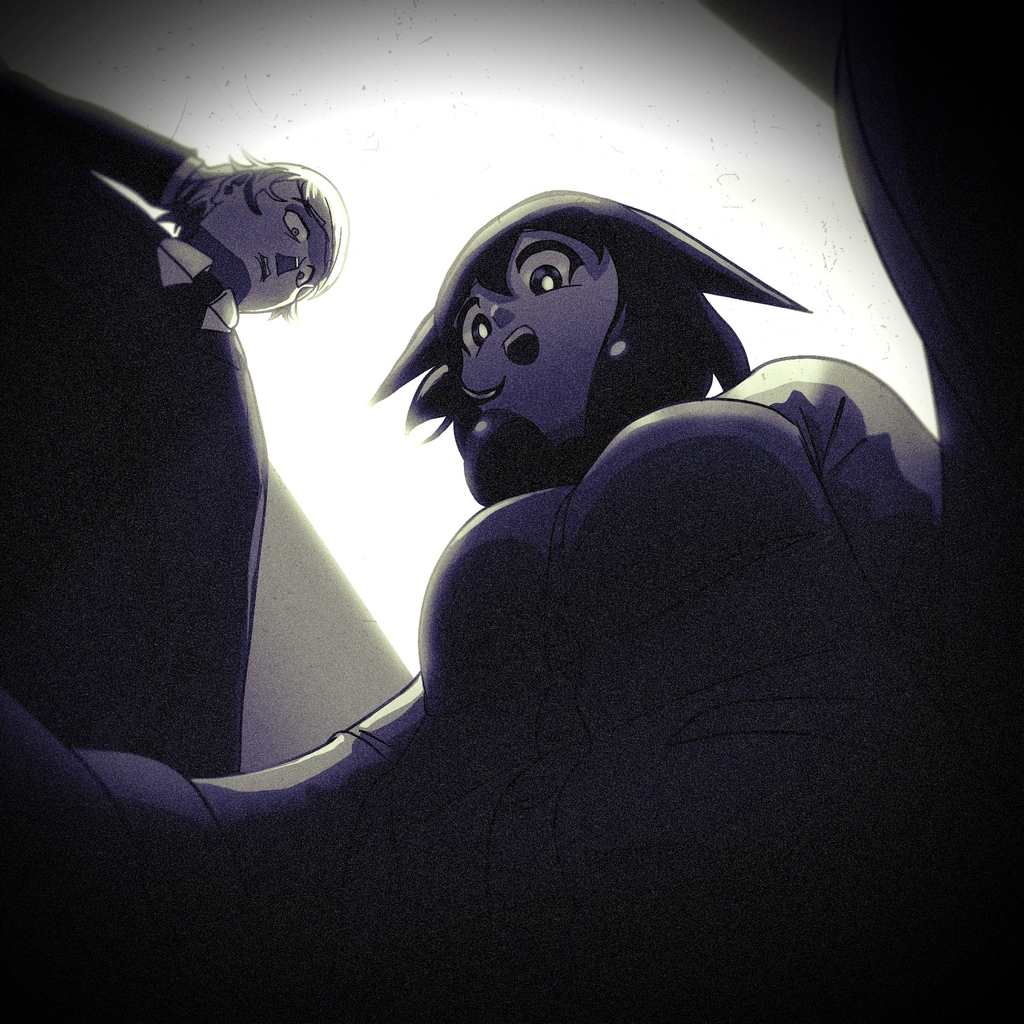 I think I might add this one to the gallery. It’s very easy to imagine a sort of dialogue going between the two:

-“I mean the camera’s alright Nelly, but do you know how to maintain it? What are you doing?”
-“Look. It’s rolling.”
-“Do you even know how to film?”
-“I think I have the gist of it. We’re going to sing that Garfunkel song.”
-“No way I’m getting in this mess.” 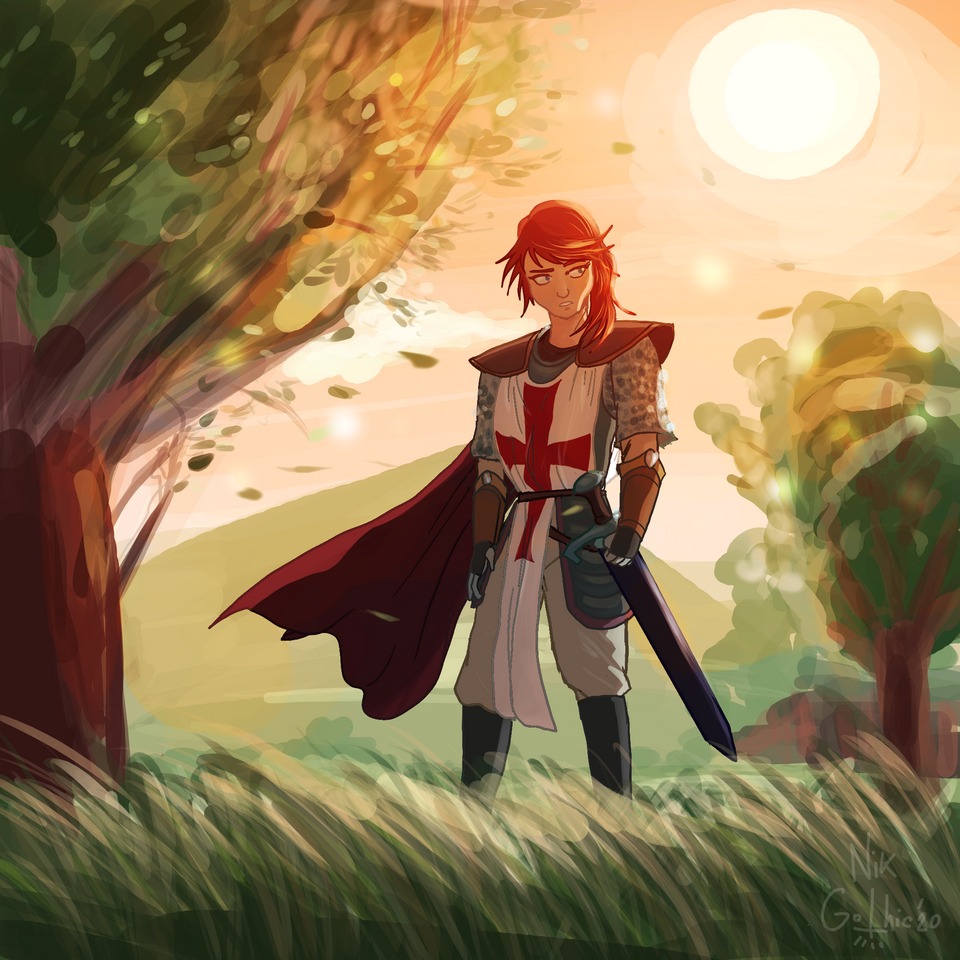 Basic-5 Size Opacity is the next one I tried, which is like the usual Basic-5 brush but has opacity elements, great for adding some lighting or texture effects for backgrounds. I don’t exaclty like the backgrounds on here, since the grass fields, trees and mountains look a little too washy and detached from the central figure in here(an Italian knightess by the name of Jesse), but I still appreciate it as a lighting experiment, and it was an excuse to get to unearth and get to practice Jesse some more, an old character who I’ve had some really good sketches of. These are all from 2014: 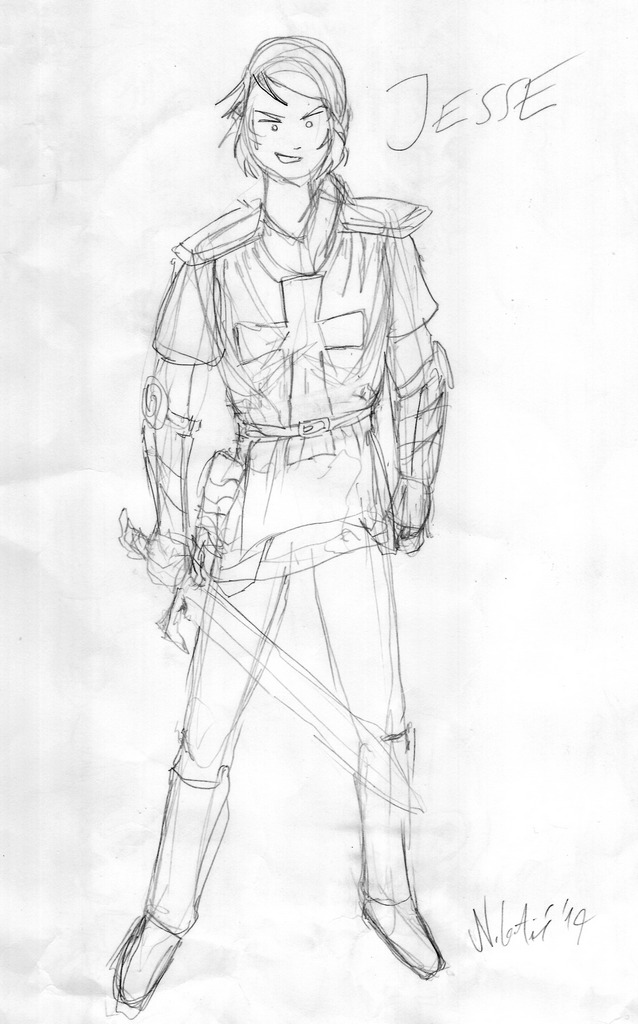 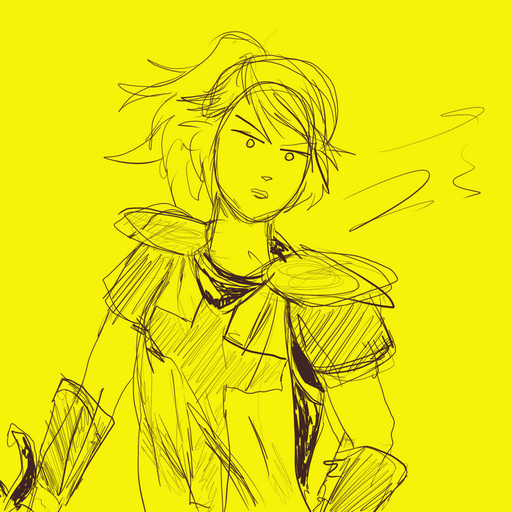 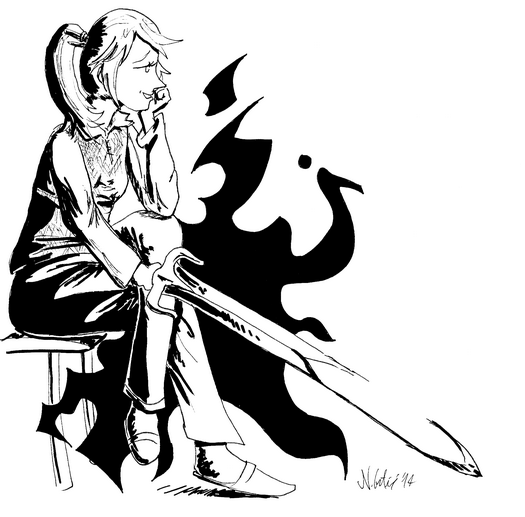 That’s all I have for this week, but I want to keep continuing to play with Krita brushes and hopefully in the future make my own custom set. I already made some of it and I keep refining it, but to really understand the possibilities that Krita can give me I really need to take a look at every nook and cranny it hides, and I’m very excited with the way it gives me a reason to experiment and be myself in my drawings, as well as the new life it can breathe into them.